The Curse of Child Marriage: Our Neglect and Ignorance

Home Page > Uncategorized > The Curse of Child Marriage: Our Neglect and Ignorance

Let me begin with a story of an Indian woman that was presented at a TED talk:

“I am going to give you a story. It’s an Indian story about an Indian woman and her journey. Let me begin with my parents. I am a product of a visionary mother and father. Many years ago when I was born in the fifties, it didn’t belong to girls in India. They belonged to boys who would do business and inherit business from parents and girls would be dolled up to get married. My family was unique; we were four girls and fortunately no boys. My father defied his own grandfather almost to the point of disinheritance because he decided to educate all four of us. He sent us to one of the best schools in the city and gave us the best education. When we are born we don’t choose our parents, and when we go to schools we don’t choose our schools. We go to the school which our parents choose for us.

This is the foundation which I got. My father used to say that I am going to spread my four daughters in four corners of the world. I don’t know whether he really meant but it happened. I am the only one left in India; one is a British; another is an American and the third is a Canadian…

I am a product of opportunities; rare opportunities which the girls in the sixties didn’t get. I knew what I was getting was unique because all my other friends were getting dolled up to get married. Here I was with my tennis racquet, in school, doing all sorts of extra-curricular activities…”

In the 1970s, India had a tough woman in the police service. She had left her job as a lecturer because of her urge to be outstanding. Initially she was posted at the New Delhi traffic police department. Her stubbornness and honesty made the police more vigilant and she did not tolerate taking bribes. She made headlines when she issued a ticket to the then Prime Minister Indira Gandhi’s car for violation of traffic rules. Such a thing had never happened in India before.

Certainly, many people disliked her and she was continually transferred throughout her career. The transfers never cowed her down. Instead, she gave the corrupt officials a tough time everywhere she went. As an example of punishment posting, she was transferred to Tihar Jail (the largest jail in India) as the Inspector General. They assumed that dealing with hardened criminals would bring this troublesome lady in line and she wouldn’t challenge the system again.

But she wasn’t easy to subdue. She accepted her transfer without resistance and took charge of the jail from the very first day. She met the prisoners personally to know more about their grievances. She introduced Vippassana Meditation for all the ten thousand inmates as she believed that they can free their mind from criminal thoughts if they practiced meditation.

Later on, she founded two NGOs for the empowerment of women and the under-privileged. After retiring from police service she became an active member of the anti-corruption movement and presently is one of the most popular faces working against social injustice.

She is none other than Kiran Bedi.

Now, if she would have gotten married young like her other female friends, and settled for a family, we would have missed the most badass person in the history of Indian Police.

When a boy is born, parents think of his education and career. But when a girl child is born, the first concern of the parents is to plan for her marriage in the future. It is sadly, a common notion that the real responsibility of a woman is to take care of the family; to raise kids and that they should not venture into the professional world and leave it to men. In a family of one girl and one boy, even if they are loved equally, the entire financial planning of parents varies for them: education for the boy and marriage for the girl.

Would there have been a Kiran Bedi if all parents had thought the same?

A survey by United Nations revealed some shocking numbers which shows that on an average 39,000 child marriages happen in India every day. This is about one child marriage every second. That means one out of two marriages in India are child marriage and our country tops the list with 40% of the world total happening here. Discussing this issue let us first see why this evil practice is prominent in India.

1)    A girl child is not seen as a source of income and so is considered a burden for the family. Giving away daughter as early as possible relieves the burden off the family’s shoulder.

2)    For the lower strata of the society, poverty is a major reason for child marriage which ensures that they have one less person to feed. Many times girls are sold as brides to other families.

3)    In some cases, early marriage ensures security for the girl in places which has high rate of rape and molestation.

We see mass protests against rapes, which are initiated by the media. These also die down after a certain point of time. I do not believe that any major change can be brought about by protests and movements. We may succeed in curbing some thousands or even lakhs of such incidents, but the number is very tiny.

The only way out of the mess is Education.

We have to realise that to bring change on a large scale mere protests are not enough. We saw what happened after the Nirbhaya incident. Here is a small example of what education can achieve:

The average marriage age for girls rose from to 17 from 14.5 in the Marathwada region of Maharashtra state, just two years after girls were offered a life skills course. The course, run by the Institute for Health Management, Pachod, aims to improve girls’ confidence in influencing decisions about their own lives, including marriage.

If we want to uplift the position of women in the society, rapes and child marriages are not the only things that come on our way. Below is a nice pictorial depiction of crime against women which I came across on Facebook: 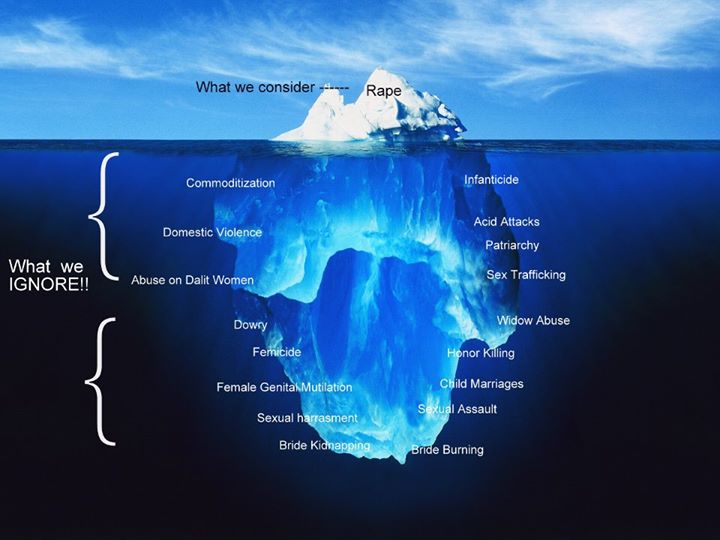 We are talking about tougher law and harsher punishments to prevent crime against women. But will that change our mind-set towards women? Can be build a country safe for women by inducing fear within men? Or should we try to teach our kids to respect women? The lawmakers have tried the first approach but as can be seen it has never worked out.

The first step for change is believing in the capability of women. We have popular examples of Kiran Bedi, Indira Gandhi and Mother Teresa to support the statement. It’s time to realise that the real place for women is not at home but in the field with men; that raising kids and housekeeping is not their only responsibility and they can form an integral part of the professional world.

Education is the simple solution not only to child marriage but to all crime against women. But probably it is one of the hardest to implement. It needs a good government, capable leadership and above all a desire for change; a wish to make a better society for the people.

This is our time to act and put our actions into implementation of better educational policies. With 39,000 child marriages every day, this process will be slow. We will face challenges and fail many times. To move this mountain, individual effort is not enough and we need collective strength. This is where Bell Bajao Campaign comes into picture. It is a movement to gather men and women around this country to fight crime against women. But how the strategies are planned will decide our course of action. The major focus should be on educating people and spreading social awareness and not just incite them to protest with slogans and strikes.

This post was written by Pritam Thakur and originally appeared on his [Indi]blog— Social Scribbes.